Though the entry level smartphone segment gets flooded with numerous offerings, the mid range has also become the priority of the manufacturers due to the increasing demand. The mid range obviously offers decent performance, better camera, and good build quality than the entry-level smartphone and for the ones seeking class in your smartphone, here is a list of top 10 best smartphones under Rs 25000 that might be of your interest. 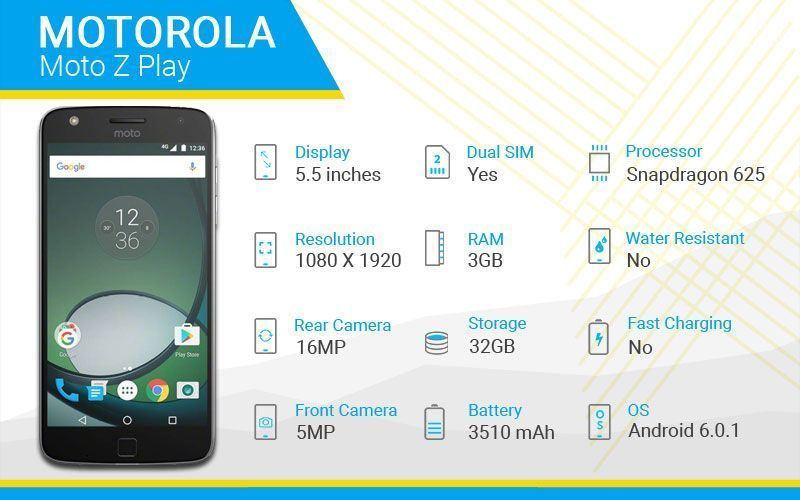 Moto Z Play comes with a 5.50-inch Full HD AMOLED screen and a 407ppi pixel density. The device is powered by an Octa-core 2.0GHz Qualcomm Snapdragon 625 processor and an Adreno 506 GPU. The Moto Z Play comes with a 3GB of RAM and 32GB of internal storage that can be expanded up to 256GB via microSD slot. For imaging, it sports a 16-megapixel rear camera with f/2.0 aperture and a 5-megapixel camera with a f/2.2 aperture for selfies. The 3510mAh battery is capable of running the device all day on a single charge. 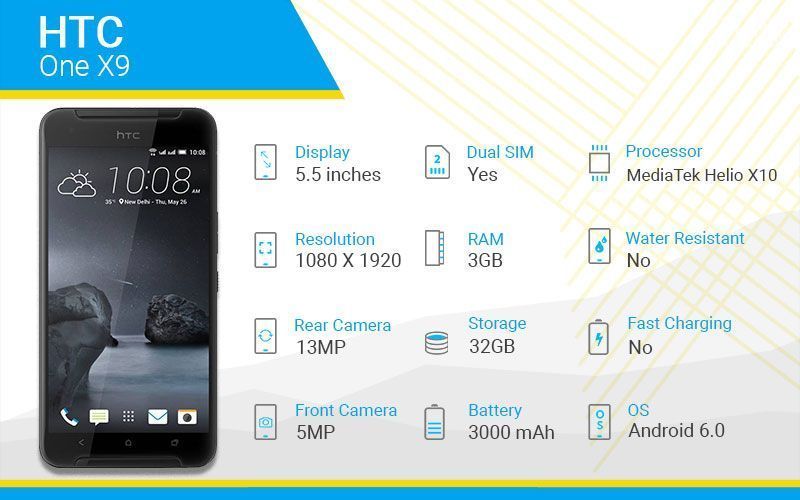 HTC One X9 sports a 5.50-inch Full HD display at 401ppi and is powered by the MediaTek Helio X10 chipset with 3GB of RAM for smoother multitasking. The device One X9 has 32GB of internal storage and allows to expand it up to 128GB via microSD card. The phone runs on Android 6.0 Marshmallow. The device packs a 13MP primary camera that has a better picture quality compared to cheaper smartphones. The daylight photo quality is very good and low light photos also give tough competition to other smartphones of this range. The 3000mAh battery is enough to keep the device working throughout the day. 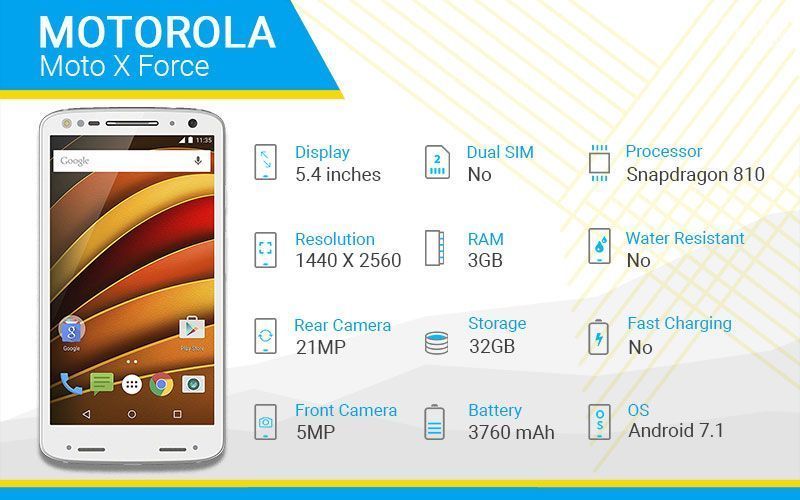 Moto X Play comes with ShatterSheild display which assures the users that the screen is shatterproof and also guarantees a 4-year warranty on the display. The display of the phone is a 5.4-inch touchscreen with a resolution of 1440X2560 pixels at 540ppi. The phone is powered by a Qualcomm Snapdragon 810 SoC with 3GB of RAM and offers an internal storage of 64GB expandable up to 2TB. The phone also sports a 21MP primary camera with LED flash and 5MP selfie shooter. 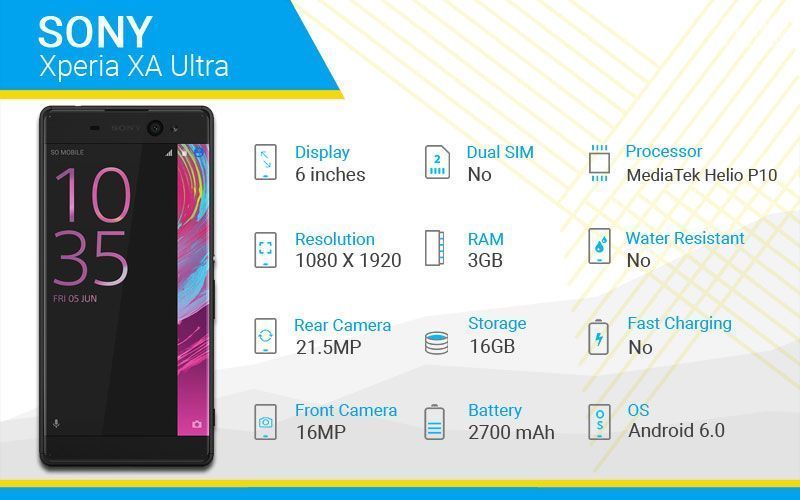 Sony Xperia XA Ultra packs a 6-inch display with a resolution of 1080X1920 pixels. The phone is powered by an Octa-core MediaTek Helio P10 MT6755 processor with 3GB of RAM and an internal storage of 16GB that can be expanded up to 200GB. The device sports a 21.5MP rear camera with hybrid autofocus, low light photography and wide angles (88 degrees). The 16 MP secondary camera with smart selfie flash and optical image stabilizer (OPI). Though the 2700mAh battery pack is not that powerful but, offers decent backup. 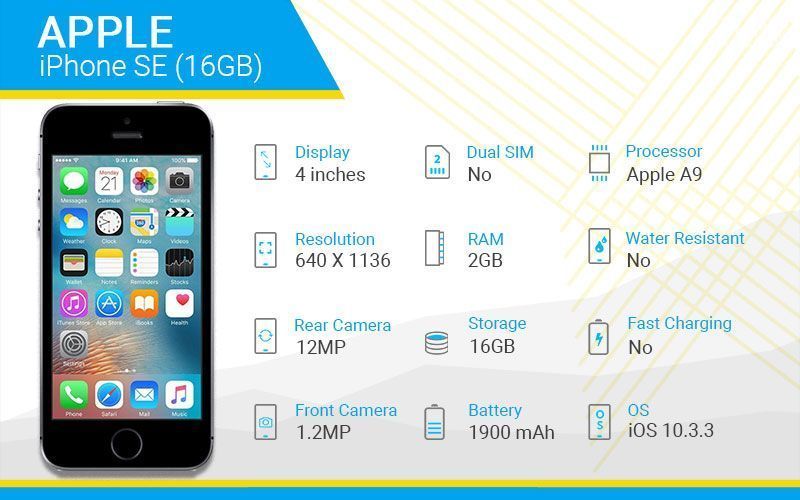 The Apple iPhone SE has internals similar to iPhone 6S and a design similar to iPhone 5s. iPhone SE has a 4-inch display that is not even HD but the texts appear very sharp and brightness is also sufficient to run it in direct sunlight without any trouble. It is powered by Apple A9 chip with 2GB of RAM, similar to iPhone 6S. The device sports a 1.2-megapixel f/2.4 aperture front facing camera and a 12-megapixel secondary camera that records 4K videos. The battery provides 13-hour talk-time on 3G. The phone seems to be designed for the users who prefer a premium yet compact design. 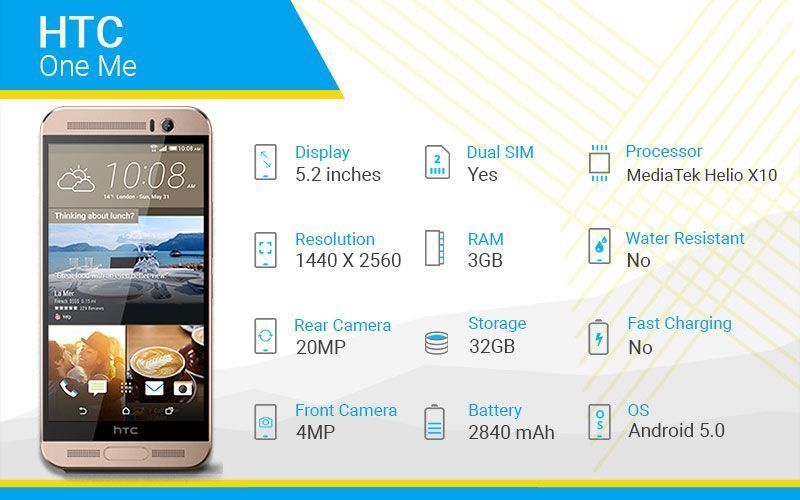 HTC One Me sports a 5.2-inch WQHD capacitive touchscreen with 1440X2560 pixel resolution and is powered by a MediaTek Helio octa-core processor with a clock speed of 2.2GHz. The device comes with 3GB of RAM and 32GB of internal storage that is expandable up to 200GB. The HTC One Me runs on Android v5.0.1 Lollipop and packs a 20MP primary camera with autofocus and HTC ultra-pixel front camera. 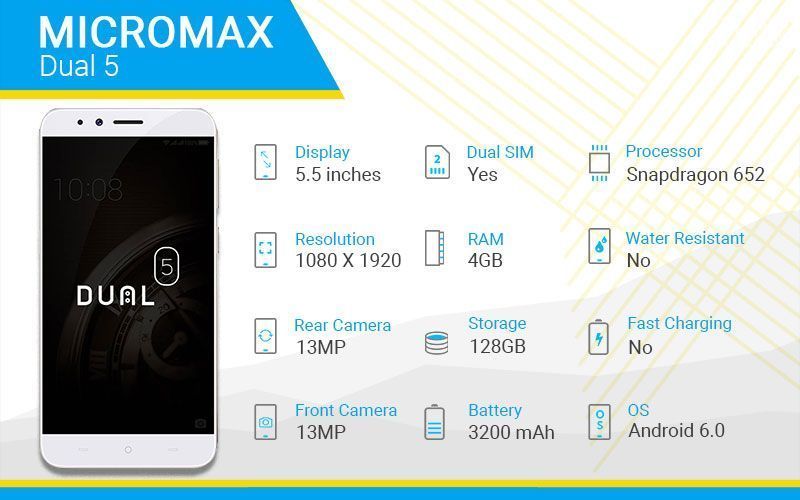 Micromax Dual 5, launched on 29 March 2017 is the first smartphone by the domestic manufacturer in about 6-7 months. With this offering, the company seems to enter the premium smartphone segment with its latest release. Micromax Dual 5 comes with a 5.5-inch full HD AMOLED screen with 1920 X 1080 pixels screen resolution and Corning Gorilla Glass 3. The device is powered by a Qualcomm Snapdragon 625 Octa-core processor with a clock speed of 1.8GHz. The Dual 5 runs on Android Marshmallow and has 4GB of RAM for smoother multitasking. The internal storage of 128GB is expandable up to 128 GB via microSD. The device sports 13MP front and rear cameras. To power this setup, the device comes with a 3200mAh battery. 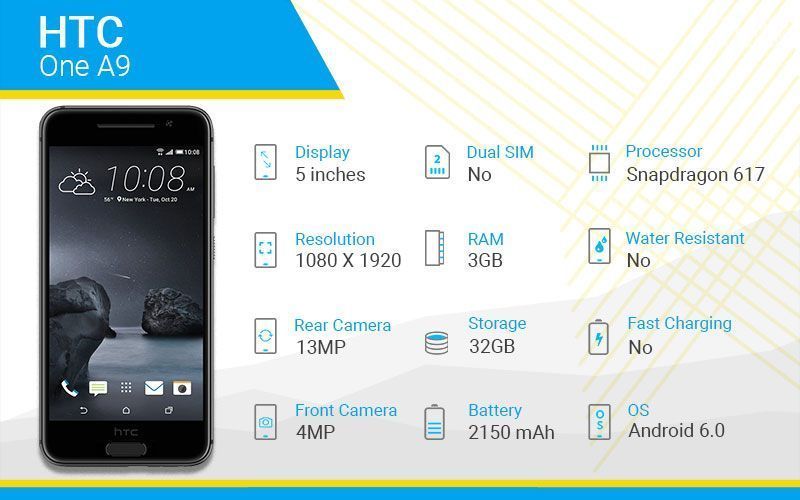 The HTC One A9 comes with a 5-inch Full HD capacitive touchscreen with 1080p. It runs on Android Marshmallow powered by a 1.5GHz quad core + 1.2GHz quad core Qualcomm Snapdragon 617 processor. The device packs 3GB of RAM and an internal storage of 32GB that is expandable up to 2TB. The primary camera is a 13MP sensor with autofocus and also packs a UltraPixel front facing camera. The 2150mAh battery provides 16-hour talk-time on a single charge. 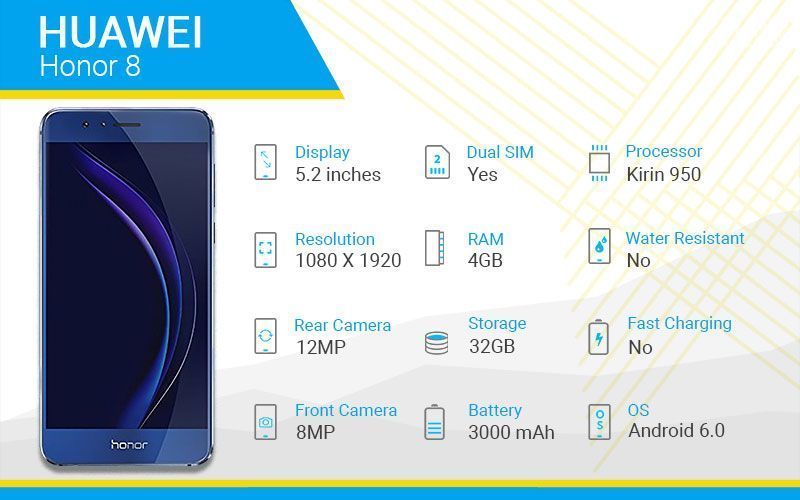 Huawei Honor 8 comes with a 5.2-inch LTPS capacitive touchscreen with 1920X1080 pixels resolution at 423ppi density and 16M colour support. Honor 8 runs on Android 6.0 powered by Hisilicon Kirin Octa-core processor with 4GB RAM and an internal memory of 32GB that can be expanded up to 128GB. The device sports a 12MP primary camera and an 8MP selfie shooter on the front. The 3000mAh battery to keep the phone running throughout the day. 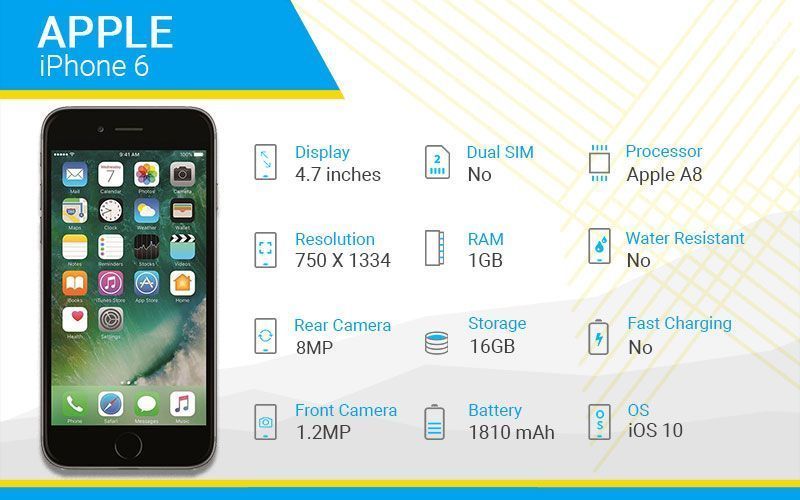 Apple iPhone 6 comes with a 4.7-inch Retina HD display and has a multi-touch screen with IPS technology. The phone is powered by Apple’s new A8 processor along with M8 co-processor which helps save battery life by allowing the A8 to go to sleep while physical activity is constantly detected and processed in the background. The 1GB of RAM seems very low as compared to Android devices today and the constant frustration of non-expandable storage continues. Camera quality of Apple devices has always major attraction among buyers around the globe. The device sports 8MP primary camera and 1.2MP secondary camera on the front and battery life are better as compared its predecessors.

These are the top 10 smartphones under Rs 25000 handpicked by us. There are other good phones too that may suit your requirements. Do let us know your pick by dropping a comment below. 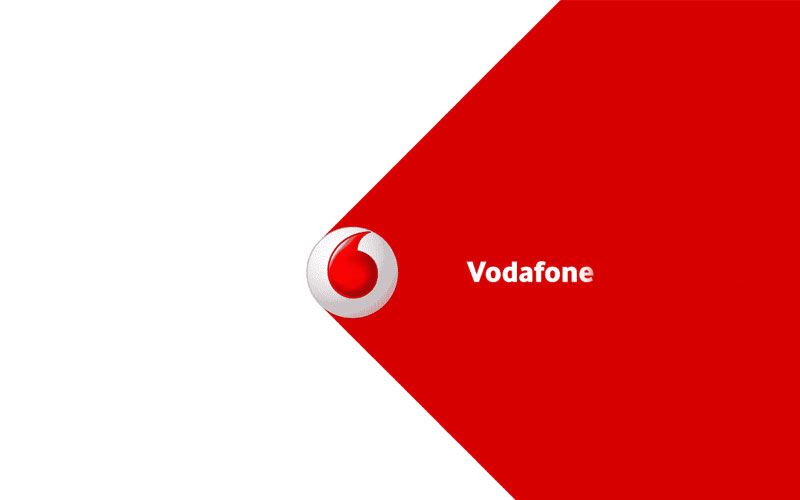 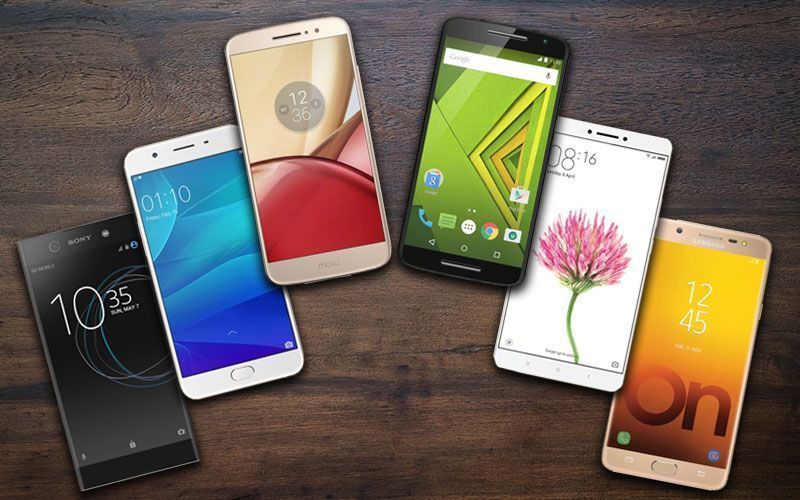