If you think “Money cannot buy happiness”, the list below might change your opinion. In this list of smartphones under Rs 50000, we have mentioned ten best premium high-end smartphones that can offer perfection in terms of class and user experience.

This smartphone segment constitutes phones with the latest hardware as well as software. They sport the best cameras till date and also the epitome of class in terms of design. 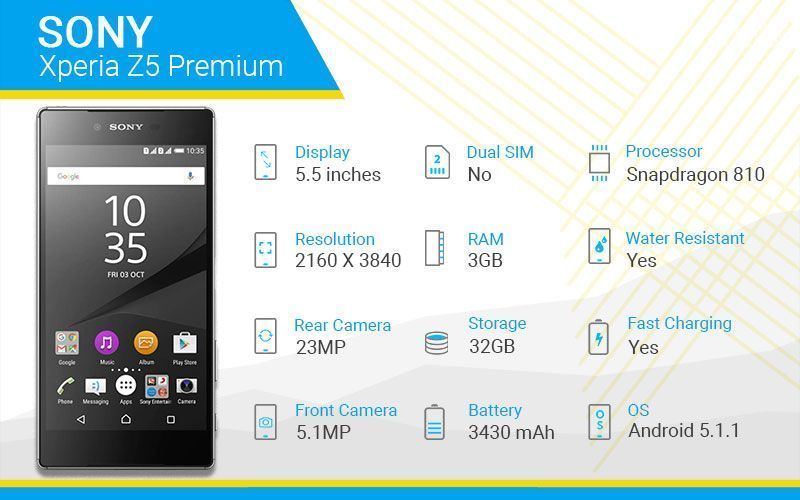 The Sony Xperia Z5 Premium comes with a UHD 4K display with incredible 806ppi which is highest in the segment. It has a Triluminos display with X-Reality-engine and Dynamic Contrast Enhancer. The display also has multi-touch sensor up to 10 fingers. The device is powered by a strong Qualcomm Snapdragon 810 Soc 2GHz octa-core processor along with 3GB of RAM which makes functioning a real smooth one. The phone sports a 23MP primary camera with an incredible f/1.2 aperture along with Steady Shot feature with Intelligent Active Mode and Video Stabilisation. There is also a 5MP selfie shooter on the front. The device runs on Android Nougat and has an active noise cancellation feature with dedicated mic. Xperia Z5 Premium offers 32GB of internal storage that can be expanded up to 256GB. The device is powered by a 2930mAh battery that provides decent endurance. The Xperia Z5 Premium is IP68 certified dust proof, waterproof for up to 1.5 meters and 30 minutes. 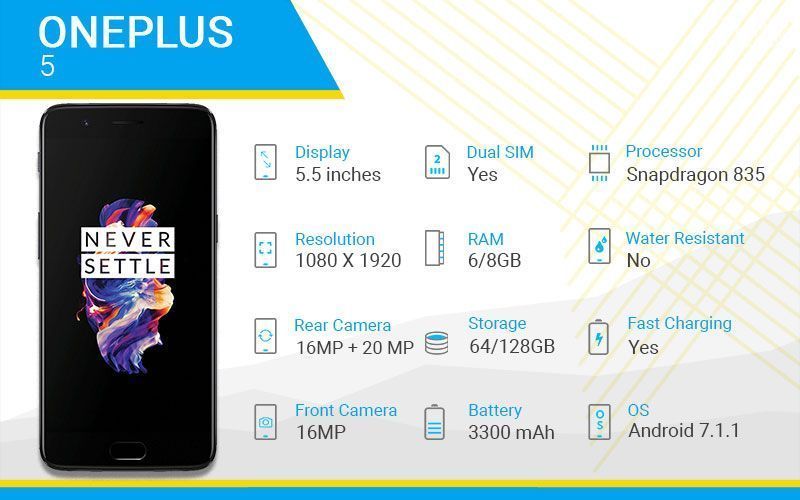 One of the best phones in the market today, OnePlus 5 comes with a 5.50-inch Optic AMOLED touchscreen that supports 16M colours with a resolution of 1080×1920 pixels and Corning Gorilla Glass 5. The OnePlus 5 runs on the latest Android Nougat 7.1.1  on Oxygen OS with 8GB of RAM. The phone offers internal storage of 128GB that is not expandable. OnePlus 5 is powered by a strong Qualcomm Snapdragon 835 octa-core processor. The 20MP+16MP primary camera that helps to capture marvellous photos. The secondary 20MP camera is Macro lens while the front camera is a 16MP sensor for perfect selfies. The all metal unibody looks elegant and the fingerprint scanner is very smooth. The 3300mAh battery provides very good endurance and supports dash charging which allows you to charge your device for full day usage in just 30 minutes. 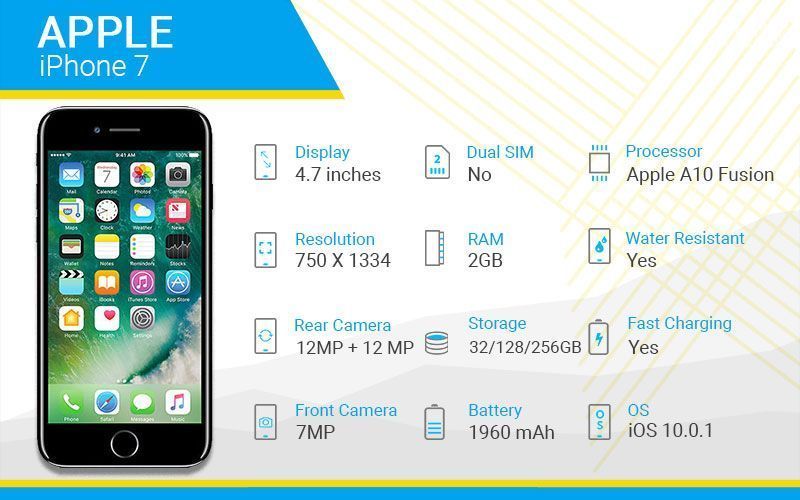 The Apple iPhone 7 comes with a 4.7-inch Retina HD display with 1334×750 pixels resolution and is powered by Apple A10 Fusion Chip processor with 64-bit Architecture and Embedded M10 Motion Co-processor with 2GB of RAM. The iPhone 7 offers a non-expandable internal storage of 32GB/128GB/256GB. The device also boasts a 12MP primary camera which helps to capture sharp photos and a 7MP front selfie shooter. The headphone jack has been replaced by a grille for the barometer vent. Though the 1960mAh battery is not very big according to the segment, still it is quite decent. 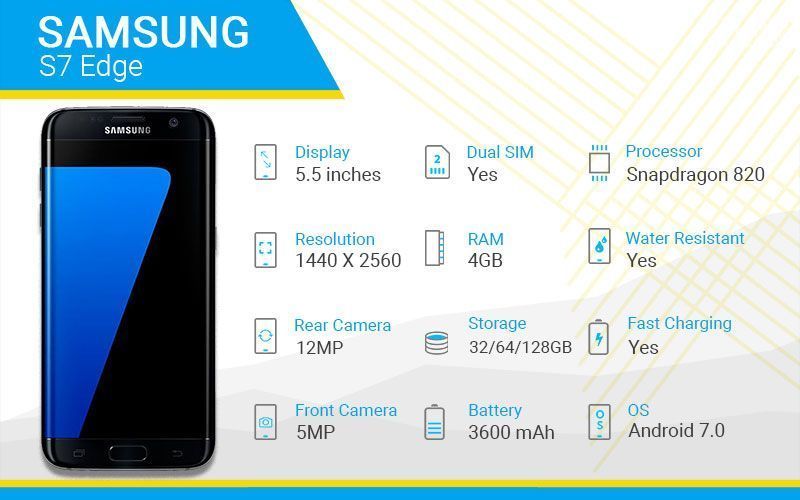 S7 Edge is one of the best smartphones by the South-Korean giant, Samsung. The phone comes with a 5.1-inch 2K display with a resolution of 2560×1440 pixels resolution at 534ppi density and powered by a Snapdragon 820 processor with 4GB of RAM. The phone offers 32GB of internal storage that is expandable up to 200GB. The device sports a 12.3MP primary camera and 5MP front facing camera. The design looks elegant and has a thickness of 7.7mm and weighs 157grams. The phone runs on Android 6.0 with TouchWiz UI. The device is backed by 3600mAh battery. 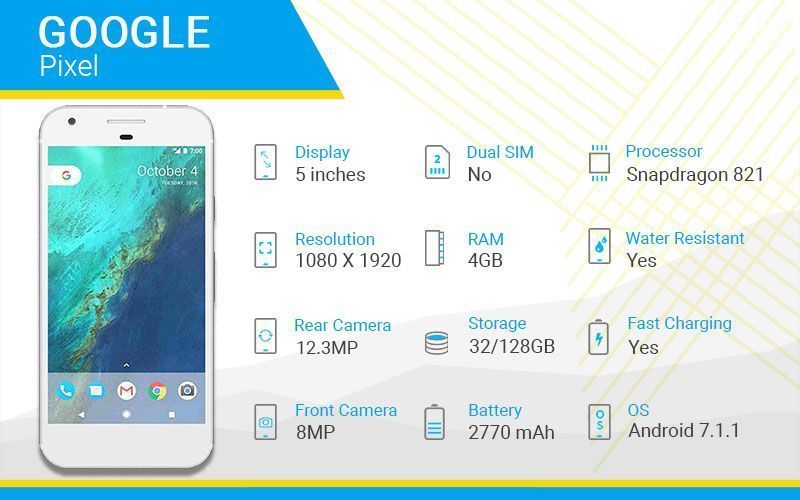 Google Pixel is one of the finest phones in Indian smartphone market today. Launched in 2016, Pixel comes with a 5-inch FHD AMOLED display with 1920×1080 pixels resolution. The device will be first to run Android O and is powered by a 2.15GHz quad-core Qualcomm Snapdragon 821 64-bit processor. The device packs 4GB of RAM and 32GB of non-expandable internal storage. The Google Pixel sports a 12.3MP f/2.0 primary camera with PDAF, LDAF, and Full HD 120 FPS (4x) Slow Motion Video support. The front camera is an 8MP sensor with f/2.4 aperture and HD video Capture at 30 FPS. All of this is backed by a 2770 mAh battery that keeps the phone working for almost a day. 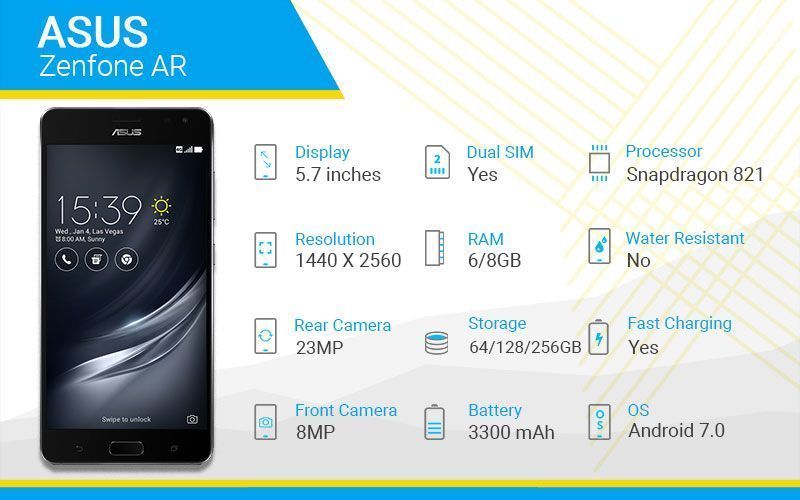 The Asus Zenfone AR is the world’s first smartphone that supports both Google’s Project Tango augmented reality and Google Daydream mobile virtual reality platform. The device comes with a 5.7-inch display with a resolution of 1440×2560 pixels resolution and is powered by a quad-core Qualcomm Snapdragon 821 processor. The device packs 8GB of RAM and offers a 128GB of internal storage that can be expanded up to 2000GB via microSD card. The Asus Zenfone AR uses a TriCam system which comprises a 23MP main camera, a motion tracking camera and a depth sensing camera and has an 8MP camera on the front. The phone also comes with 5-magnet speaker and high-resolution audio. The Zenfone AR runs on Android 7.0 Nougat and is powered by a 3300mAh battery. 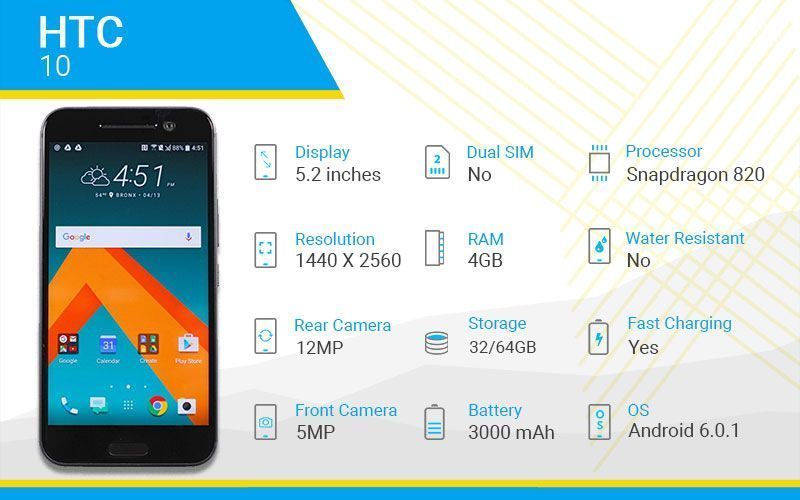 The HTC 10 packs a 5.2-inch display with a resolution of 1440×2560 pixels at 565ppi. The display is protected by Corning Gorilla Glass 3 technology. The phone is powered by a Snapdragon 820 quad-core Chipset along with Adreno 530 GPU with 4GB of RAM. The device offers 32GB of internal storage that can be expanded up to 256GB with the help of a microSD card slot. The HTC 10 sports a 12MP camera with iOS support and dual tone LED flash on the rear and 5MP camera on the front that also supports iOS. The HTC 10 runs on Android 6.0.1 Marshmallow with Sense UI and is backed by a 3000mAh battery. 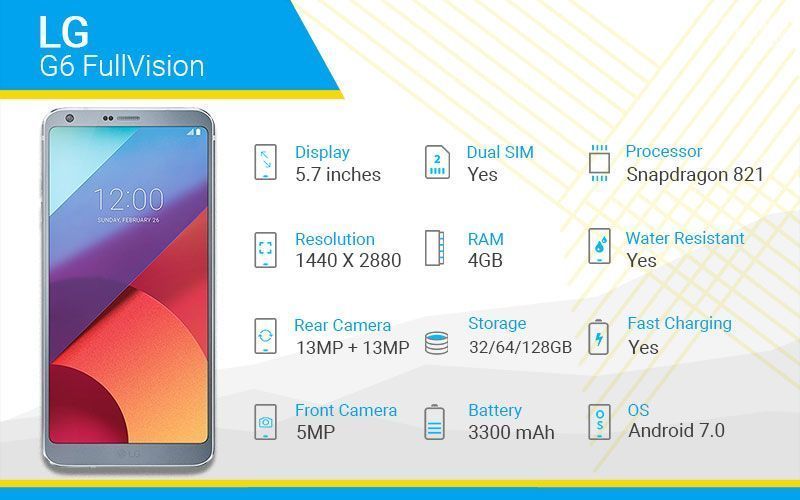 The LG G6 FullVision boasts a 5.7-inch FullVision display with 2880×1440 pixels resolution along with Dolby Vision and HDR10 technology. The device is powered by a 2.3GHz Qualcomm Snapdragon 821 quad-core processor with 4GB of RAM. The phone offers 64GB of internal storage that can be expanded up to 2TB via microSD slot. The phone runs on Android 7.0 Nougat and boasts 13MP primary camera and a 5MP front facing camera. To back this all, there is a 3300 mAh battery that provides 14 hours of talktime. 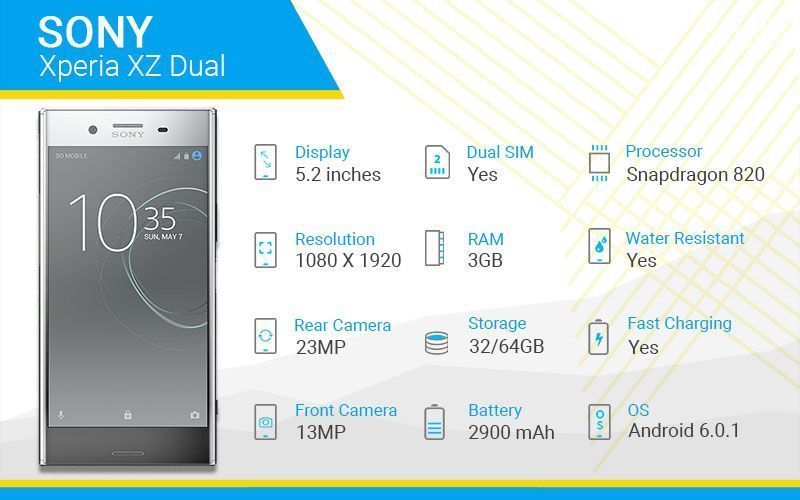 The Sony Xperia XZ Dual has a 5.2-inch full HD Triluminos display with a resolution of 1920×1080 pixels and is powered by a Qualcomm Snapdragon 820 64-bit quad-core processor at a clock speed of 2.2GHz with 3GB of RAM. The device offers 64GB of storage that can be expanded up to 256GB with the hybrid slot. The Xperia XZ runs on Android 6.0.1 along with Sony’s own UI. The 23MP camera on the rear is terrific and the phone also boasts a 13MP camera on the front. The phone weighs 161 grams and is backed by a 2900mAh battery. 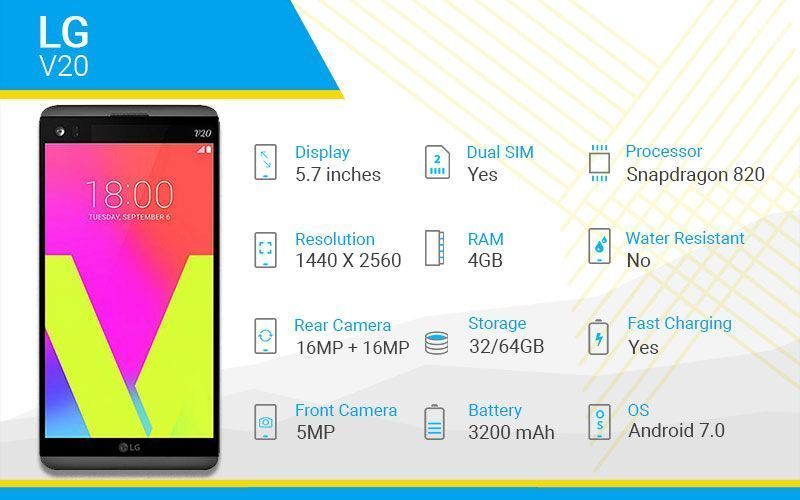 The highlight of V20 launched by Korean tech giant, LG is its exceptional audio through the Quad DAC and is amongst the phones that sport a dual rear camera. The LG V20 comes with a 5.7-inch Secondary display with Quad HD resolution. The device boasts dual 16MP sensors on the rear and a 5MP camera on the front. The LG V20 is powered by a Qualcomm Snapdragon 820 quad-core processor clocked at 2.15GHz speed along with Adreno 520 GPU for graphic handling. It has 4GB of RAM and offers an internal storage of 64GB that is expandable up to 64GB. The 3200mAh battery provides a talktime of 14 hours. 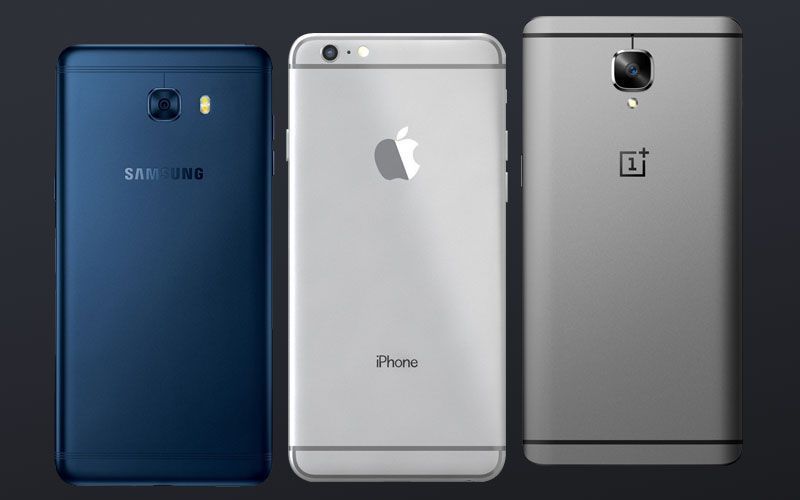 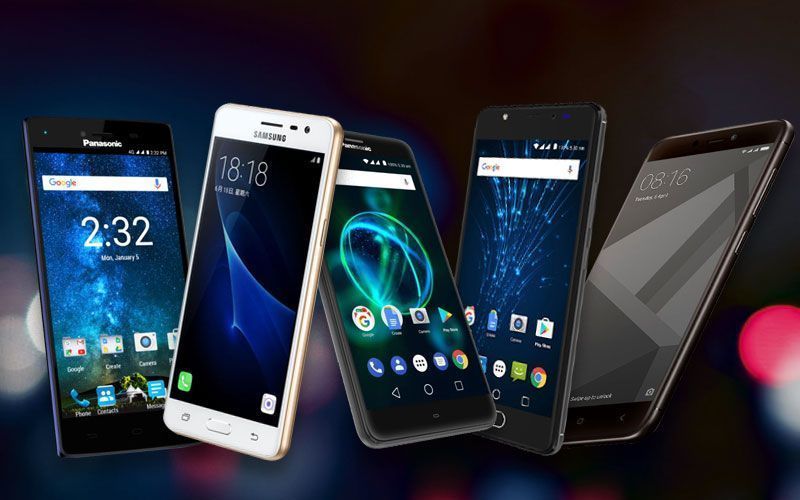