Cheaper phones may provide decent camera quality, high-end processor, and long battery life but, there is one thing that cannot be bought without paying a heavy premium, which is a better experience. There is a major difference between high-end and budget phones, which separates the buying audience completely. This segment has not seen many launches this year due to which it might prove difficult for you to make a choice.

But, to make your task easy, we have compiled a list of top 10 smartphones under Rs 30000 which are some of the best smartphones in the Indian market today as they offer solid performance, best hardware, premium design and great camera specifications. Most of them are the flagships from last year and are far more than the asking price. 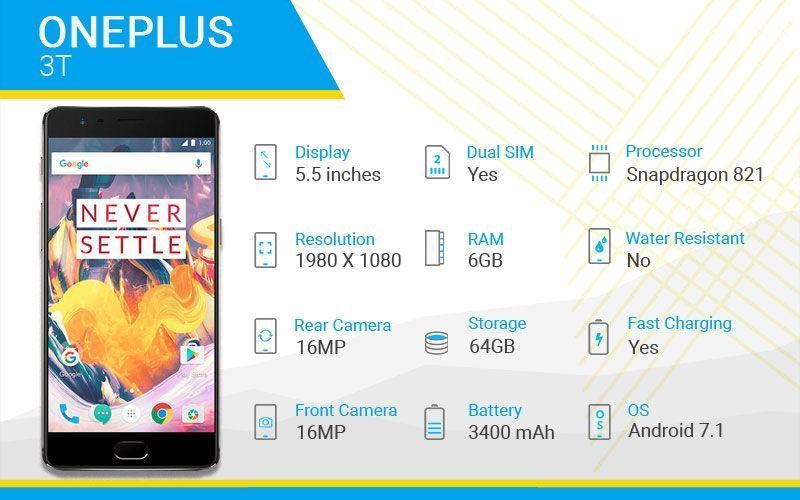 Sticking to its motto ?Never Settle’, the OnePlus launched an upgraded version of OnePlus 3, OnePlus 3T with a slightly higher price that comes with a 5.5-inch HD AMOLED touchscreen and offers a 401ppi density. The display is not the best in this segment but, great for everything. From emails to videos to gaming, the phone is competent in each segment. The device is powered by a new Qualcomm Snapdragon 821 processor which is clocked at 2.35GHz. OnePlus 3T packs 6 GB of RAM which is capable of running multiple apps at the same time and offers easy switching between them without any lag. It has a 16MP camera sensor on the back which has an aperture of f/2.0 with optical image stabilization and phase detection autofocus. The front camera is the same 16MP sensor with f/2.0 aperture. The device packs a 3400mAh battery and company claims that the phone can be charged for full day usage in just 30 minutes. 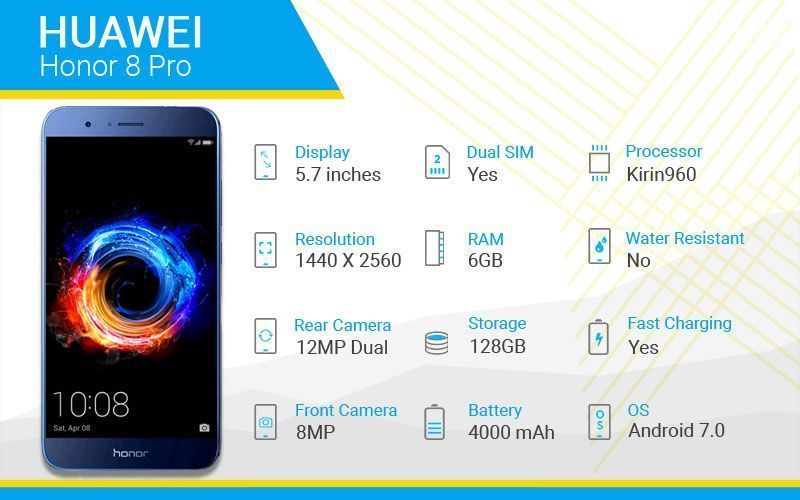 Honor 8 comes in a slim 7 mm metal unibody along with excellent build quality and beautiful looks. There is also a 2.5D curved glass that adds to the looks and comfort. The Honor 8 comes with a 5.7-inch LTPS IPS LCD display with a resolution of 1440X2560 pixels at 515ppi density protected with Corning Gorilla Glass 3. The device sports 12MP + 12MP dual rear camera with dual LED flash and an 8MP front facing camera. The Honor 8 Pro runs on Android 7.0 Nougat UI – EMUI 5.1 and is powered by a 2.4GHz octa-core HiSilicon Kirin 960 processor. The device packs 6GB of RAM for smooth multitasking without any lag and offers 128GB of internal storage that is expandable up to 256GB via microSD slot. The above specification is backed by a non-removable Li-Po 4000mAh battery and also supports fast charging. You definitely cannot ask more at the asking price. 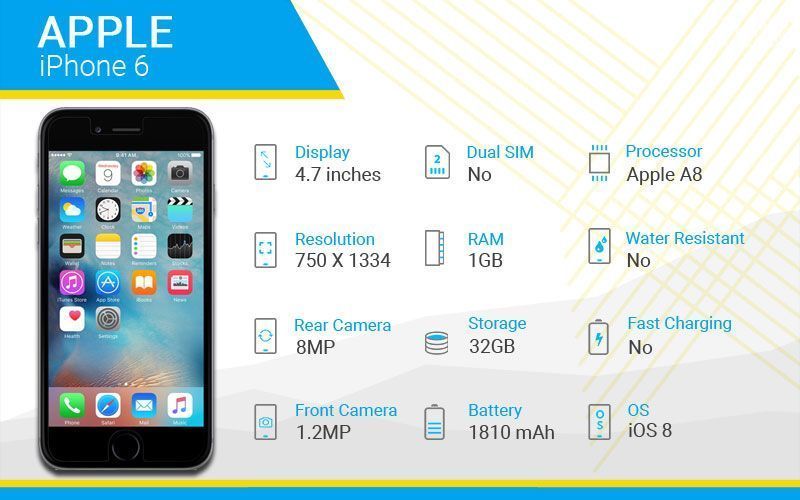 Apple iPhone 6 comes with a 4.7-inch Retina HD display and has a multi-touch screen with IPS technology. The phone is powered by Apple’s A8 processor along with an M8 co-processor which helps you to save battery life by allowing the A8 to go to sleep while physical activity is constantly detected and processed in the background. The 1GB of RAM seems very low as compared to Android devices in today’s market and the constant frustration of non-expandable storage continues. The image quality of iPhones has always been a center of attraction among buyers around the globe and iPhone 6 is no exception. The device sports 8MP primary camera and 1.2MP secondary camera on the front. The battery life is better as compared to its predecessors. 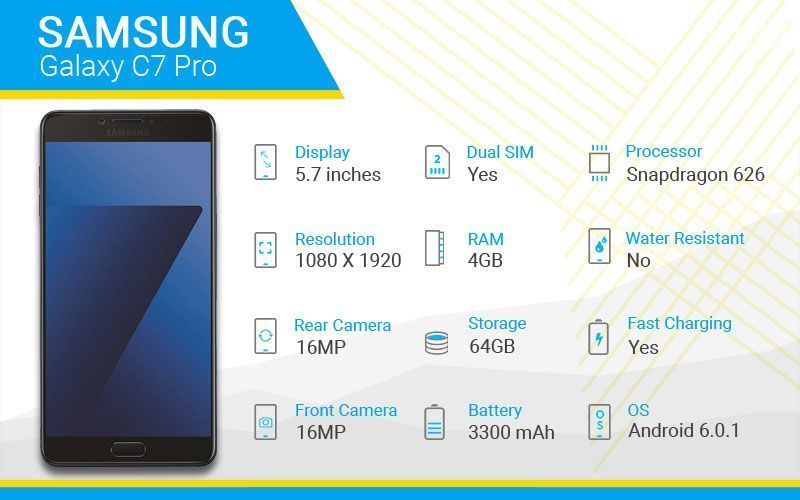 Launched in January this year, Samsung Galaxy C7 Pro comes with a 5.70-inch with a resolution of 1080×1920 pixels and is powered by a 2.2 GHz octa-core processor with 4GB of RAM. The phone provides 64GB of internal storage that can be expanded up to 256GB with the help of a microSD card. The camera setup includes a 16MP sensor on the rear and a 16MP sensor at the front. The device runs on Android Marshmallow and is powered by a 3300mAh battery and weighs 172 grams. 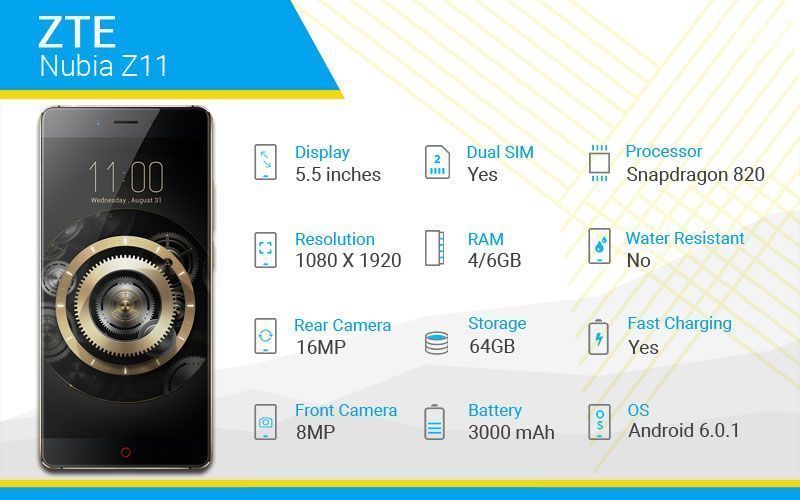 Nubia Z11 packs a 5.5-inch FHD Bezel-free with a resolution of 1920×1080 pixels at 403ppi density that supports 16M colours. Powered by a 2.15 GHz MSM 8996 Qualcomm Snapdragon 820 quad core processor with 6GB of RAM that allows smoother multitasking. The 64GB of internal memory is expandable up to 200GB. The device sports a 16MP primary camera with sapphire glass IR filter, f/2.0 aperture with optical image stabilization and an 8MP front camera with 80-degree wide angle. The 3000mAh battery provides 8 hours of talk time. 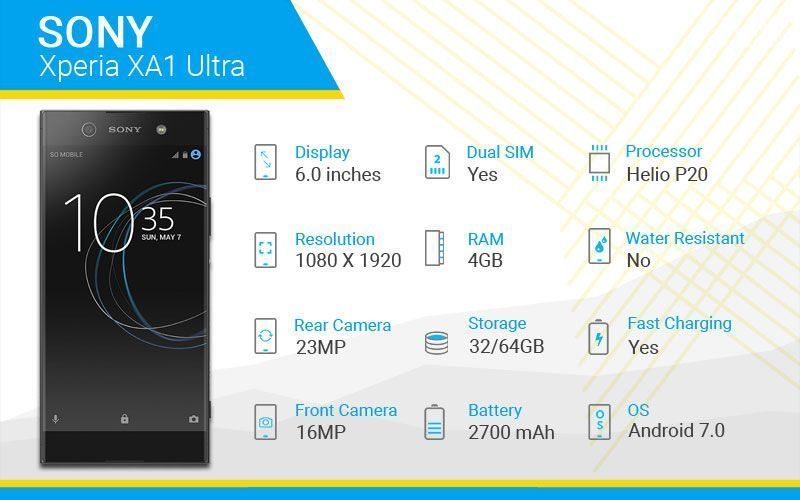 The Sony Xperia XA1 Ultra is the bigger sibling of Xperia XA1 with a couple of improvements. The device comes with a 6-inch full-HD display with a resolution of 1080×1920 pixels and is powered by a 64-bit MediaTek Helio P20 octa-core SoC with Mali T880 MP2 900MHz GPU and 4GB of RAM. The handset offers 64GB internal storage that can be expanded up to 256GB with the help of a microSD card. The device packs a 2700mAh battery. 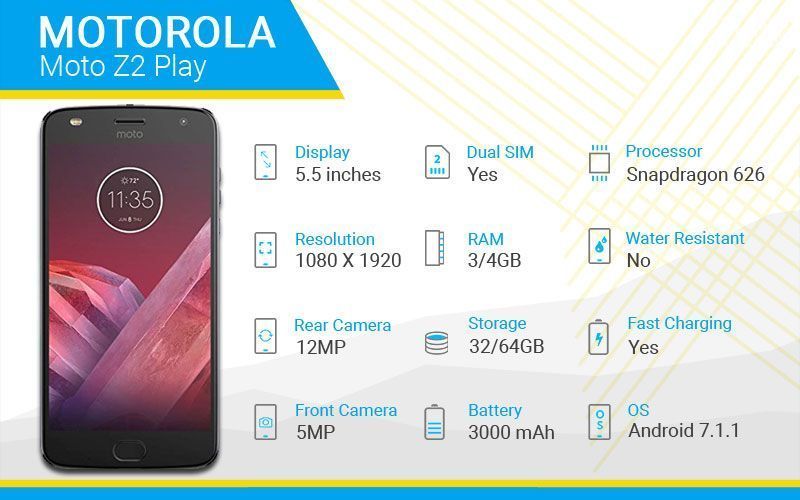 The main attraction of Moto Z2 Play, apart from good battery life, are MotoMod accessories. Launched in June this year, the phone comes with a 5.5-inch display with a resolution of 1080X1920 pixels at 401 pixels per inch density. The device is powered by a 2.2GHz octa-core Qualcomm Snapdragon 626 processor and comes with 4GB of RAM. The phone offers 64GB of RAM that can be expanded up to 2TB. The Moto Z2 Play sports a 12MP primary camera with f/1.7 aperture that captures 25% more light and a 5MP selfie shooter on the front. The 3000mAh battery is capable enough for a full day use and battery backup can be extended with the help of MotoMods. 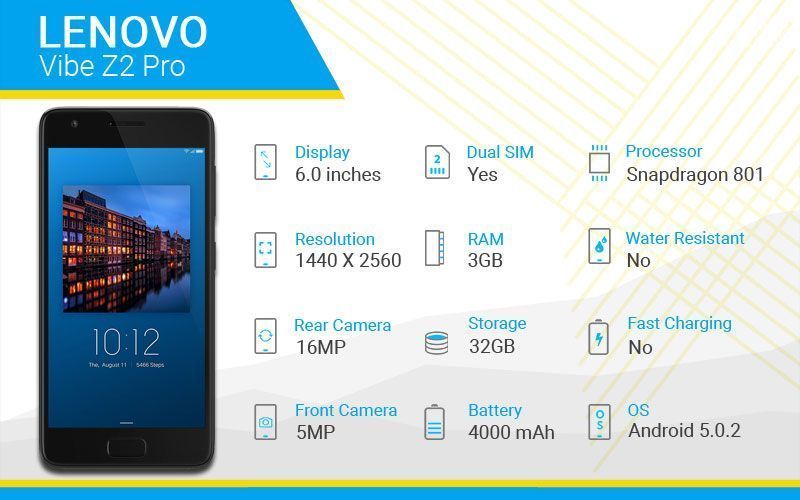 Lenovo Vibe Z2 Pro comes with a 6-inch touchscreen with 1440×2560 pixels resolution and is powered by a 2.5GHz quad-core processor with Qualcomm Snapdragon 801 SoC. It has 3GB of RAM and offers a 32GB internal storage, which cannot be expanded. The device packs a 16MP camera with RGB and BSI sensor and a 5MP front facing camera. The Lenovo Vibe Z2 Pro runs on Android 4.4 and is powered by 4000mAh battery that keeps the phone working throughout the day on a single charge. 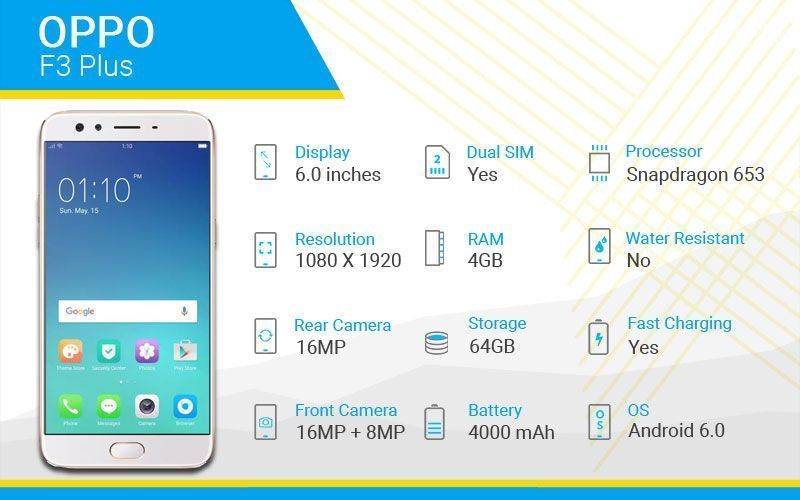 The Oppo F3 Plus is packed with a 6-inch display with 1920×1080 pixels resolution along with Adreno 510 GPU. The device is powered by a 1.9GHz octa-core Qualcomm MSM8976 Pro and runs on Android Marshmallow 6. It has 4GB of RAM and offers a 64GB of internal storage that is expandable up to 256GB. The Oppo F3 Plus sports 16MP primary camera with f/1.7 aperture and 16MP + 8MP dual front facing cameras for perfect selfies. Fueling the phone is a 4000mAh battery that easily last for a day. 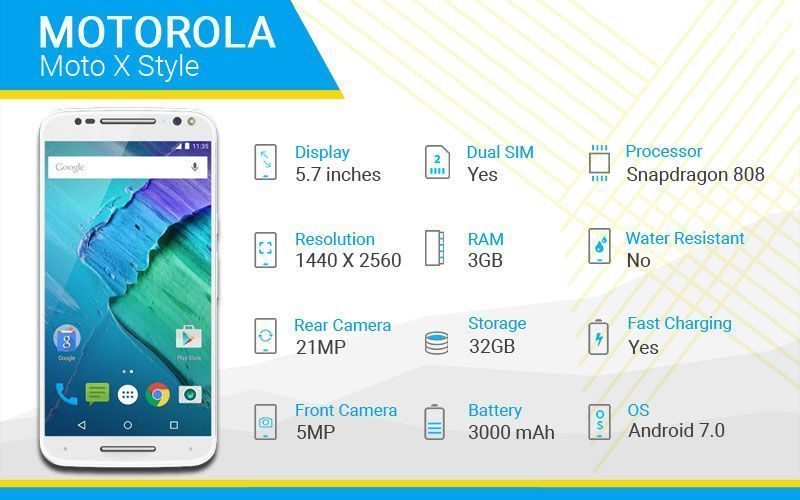 The Moto X Style was launched in 2015 but has managed to make it to the list. It comes with a 5.7-inch display with 1440×2560 pixels resolution at 520ppi density that provides very good experience while watching videos or playing games. The device is powered by a 1.8GHz hexa-core Qualcomm Snapdragon 808 MSM8992 processor and comes with 3GB of RAM for a smooth functioning of the device. The phone offers 16GB of internal storage that can be expanded up to 128GB via microSD card. The device sports a 21-megapixel primary camera on the rear and a 5-megapixel front camera. The Moto X Style runs on Android 5.1.1 and is backed by a 3000mAh battery. 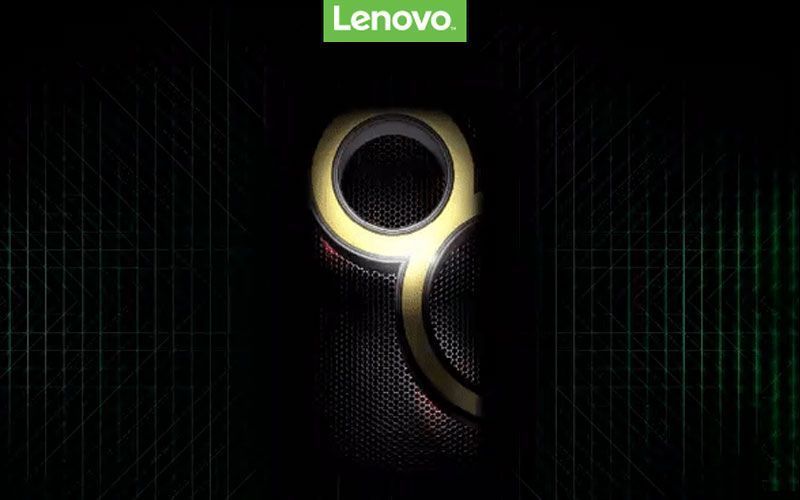 Lenovo K8 Note To Be Launched On August 9 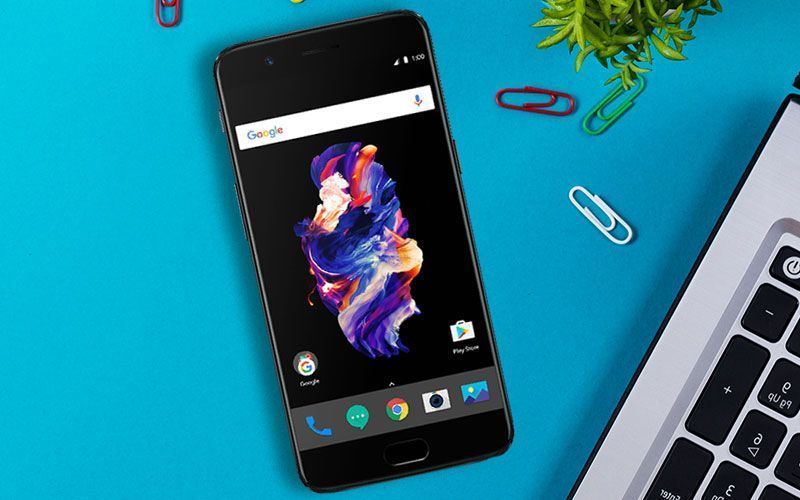